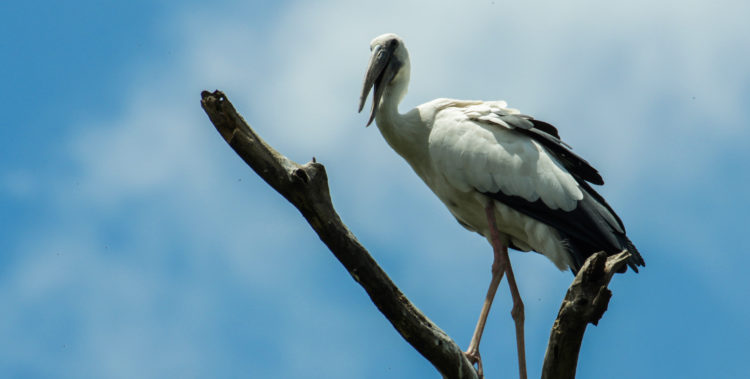 This is the fourth blog post which deals with the introduction of the birds whom we are most likely to come across. (Here are the previous links : Post 1 | Post 2 | Post 3). Since, this is the last post dealing with this topic, I have selected some slightly less common birds to showcase. This however, does not mean that they are difficult to sight. These birds are usually sighted in specific destinations and are abundantly available in such locations. 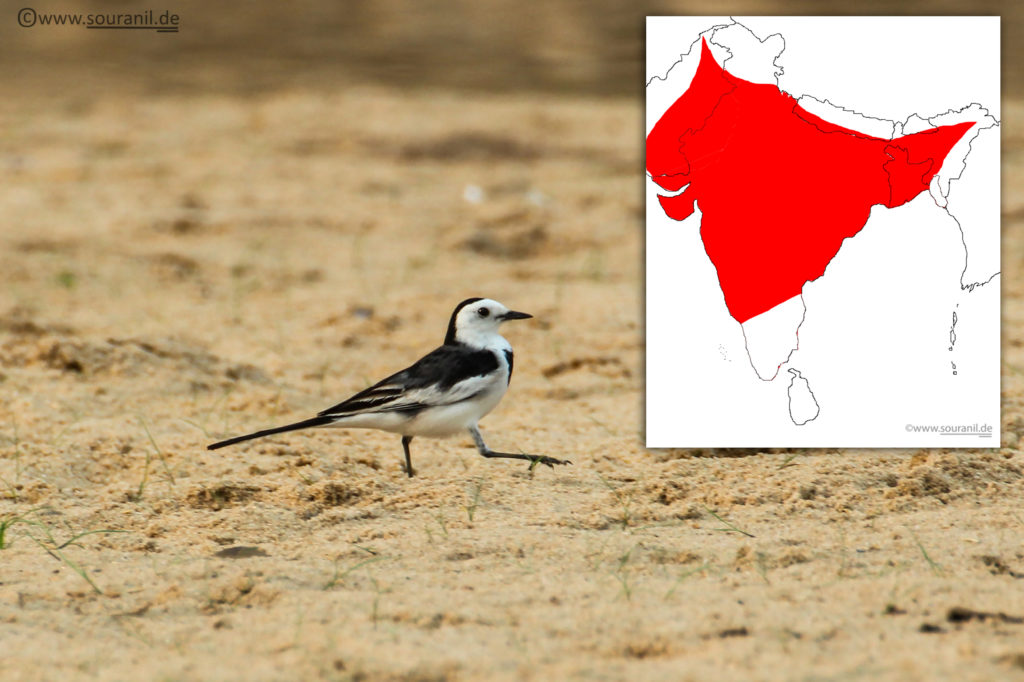 Appearance : Also known as the Indian Pied Wagtail, they are black and white passerines, with white throats and chins and narrow black breast bands. During breeding, their plumage shows some variation with thicker and longer breast bands.

Habits : Most Wagtails usually have chirpy calls and are known to feed on ground insects and flies. The most striking feature of wagtails is their constant wagging of tail and hence the name.

Habitat : They mostly inhabit upland streams and riversides in breeding season. During winters, they are also seen in gardens, lawns and urban parks (often close to water). 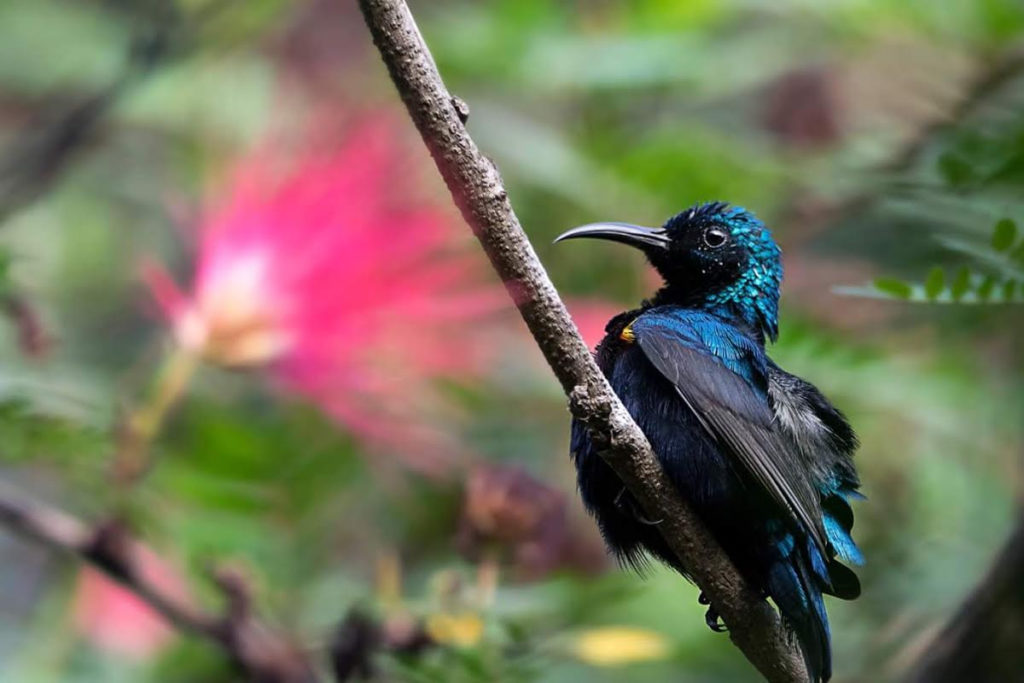 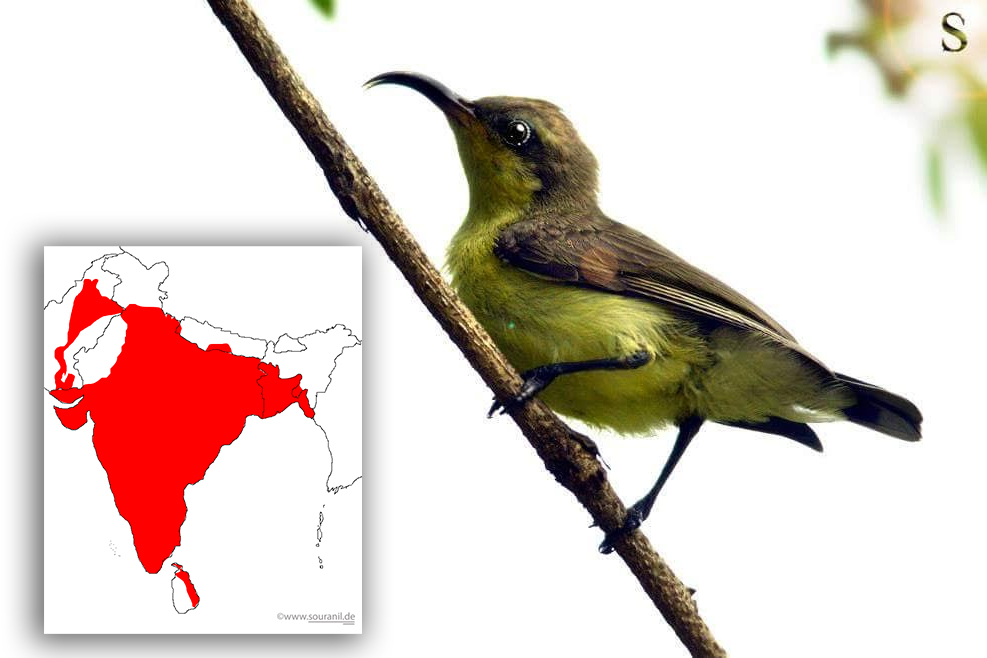 Appearance : They are one of the smallest birds of the Indian subcontinent. The males are metallic purple-blue. On the other hand, the females are brownish grey above and yellowish below. The eclipse males are identified by their long purple strips from chin to belly.

Habits : They are noisy, buzzing birds but they also possess sweet melodious calls. Purple Sunbirds feed on nectar and invertebrates.

Habitat : They inhabit all types of open, wooded country, including urban parks and gardens. They exist as pairs or small groups. Sometimes, people use well-flowered trees to locate them. 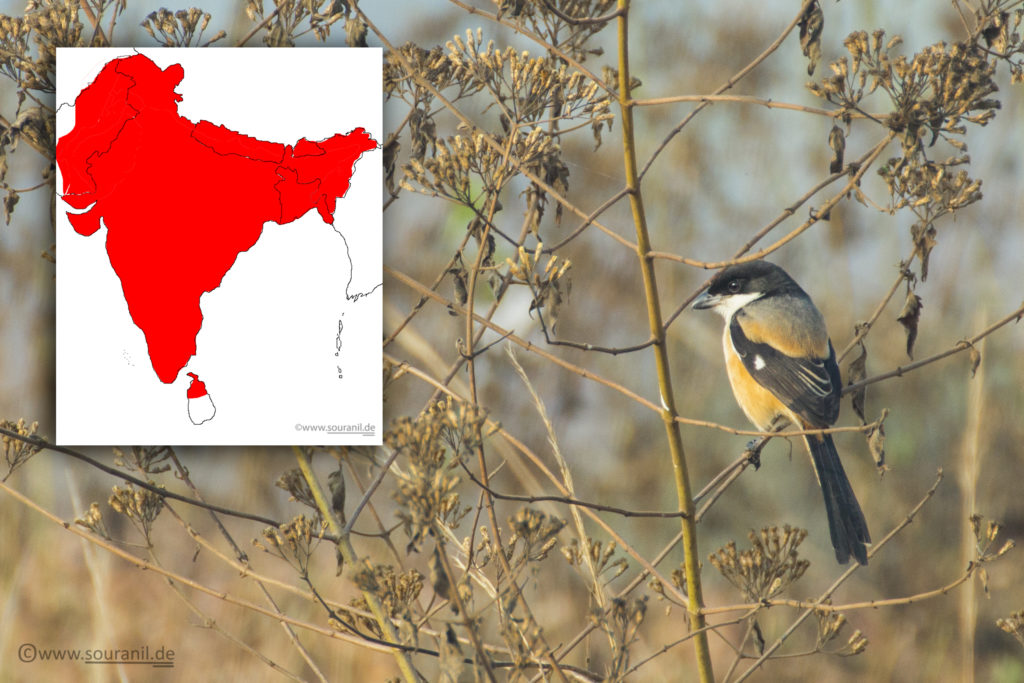 Appearance : Also known as the Black-headed Shrike and Rufous-backed Shrike, they are grey and rufous shrikes with very long tails. Like other shrikes they too have their black eye masks but they are overshadowed by their black crowns. Sexes are alike and juveniles are scaly.

Habits : Shrikes are known to be noisy birds with shrieks but sometimes they can mimic birds of the grasslands. They are preying birds who feed on smaller birds and insects.

Habitat : They are often seen to perch on roadside wires, looking for prey. Shrikes are mostly sighted in grasslands and open areas (mostly dry) and they are territorial in nature. 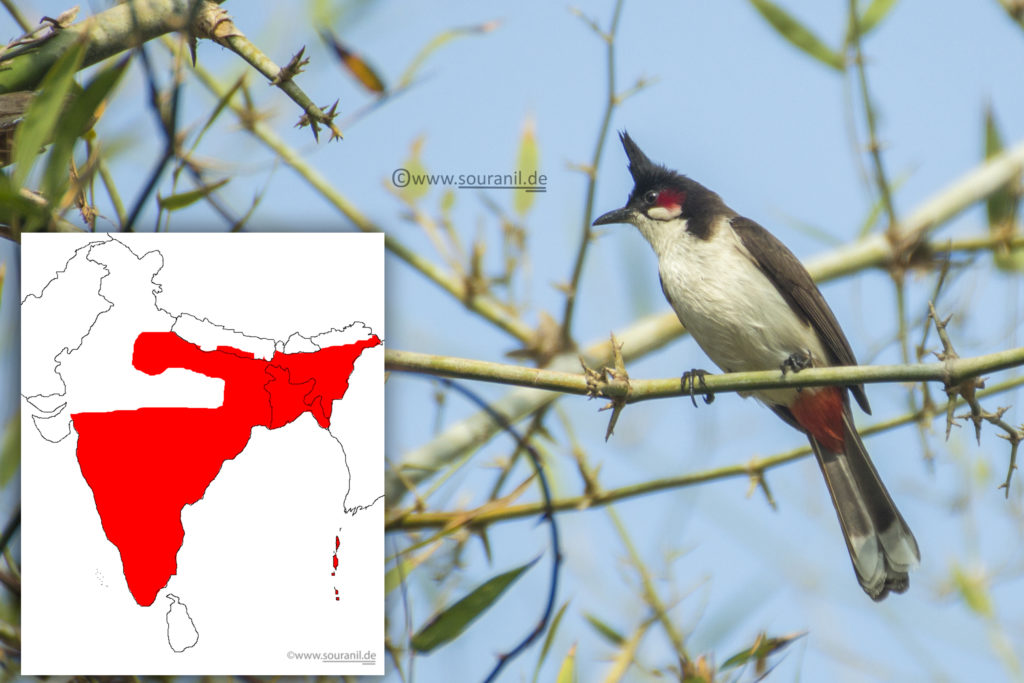 Appearance : They are slim songbirds with brownish backs and white fronts, who have red vents like the Red-vented Bulbul but they also have reddish marks near the cheek. Red-whiskered Bulbuls also have the typical Bulbul crests, making them perfect examples of the Bulbul family.

Habits : Bulbuls have noisy shrieks as well as melodious and loud tweets and whistles. They mostly feed on nectar, fruit and insects at all levels including ground. Their nests are made in low cover. 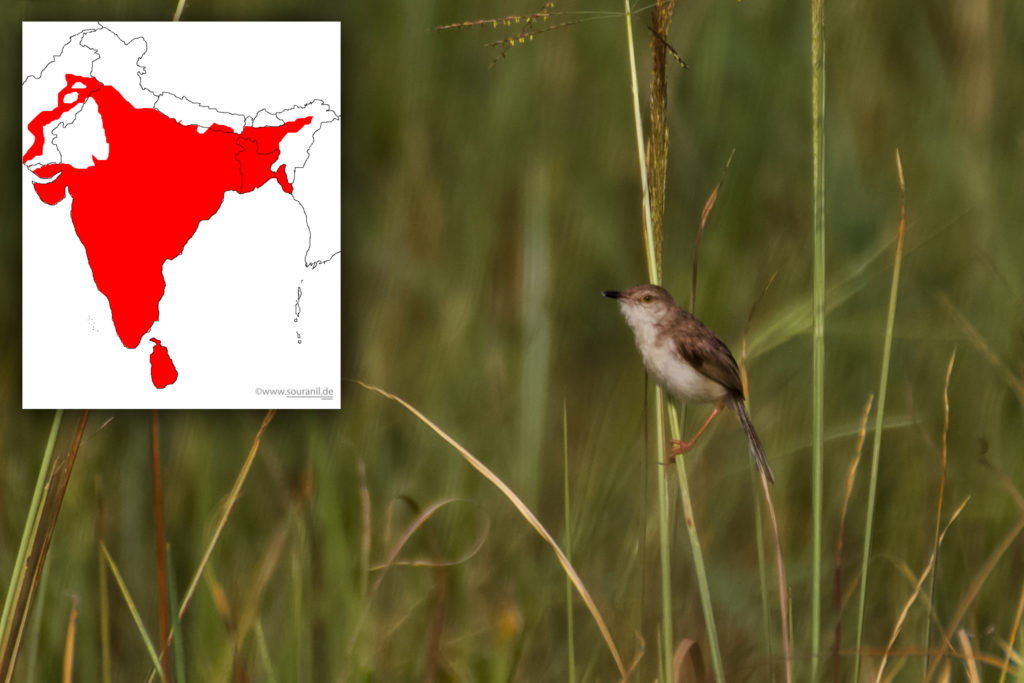 Habits : They are noisy and sometimes produce a cricket like clittering sound. Prinias have weak flights and so they nest in lower levels and also feed on insects at ground level.

Habitat : They inhabit all types of damp grassland, crops and scrubs and are usually available in huge density in a particular spot. They confide themselves inside tall grass and sometimes camouflage into dry vegetation. 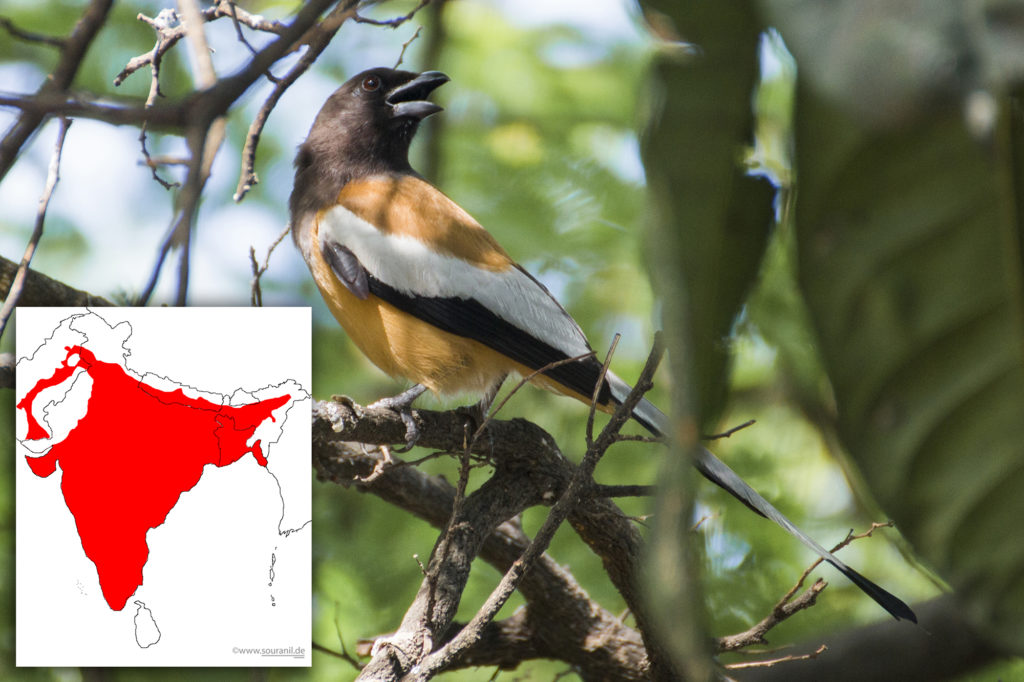 Appearance : Also known as the Indian Treepie, they are long-tailed, grey and rufous crows. They have white streaks in their upper wings and red irises. Sexes are alike.

Habits : They are noisy and excellent mimics. Treepies are very restless, confiding and swift in movement. They are omnivorous and feed on insects, reptiles, smaller birds and eggs as well as fruit and nectar.

Habitat : Rufous Treepies are the commonest of their kind and are available in any well canopied forest, dense vegetation or tall trees. 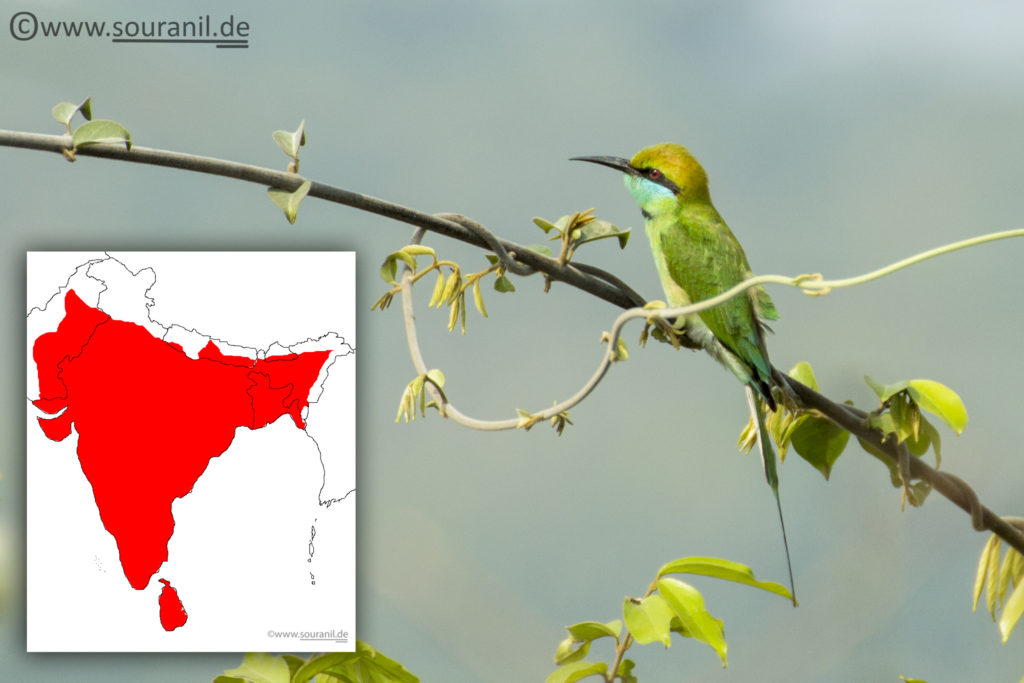 Appearance : They are small, active, green birds with characteristic black gorget and eyestripes. Although, their primary plumage is green, they have buffy crowns and bluish cheeks. Sexes are alike.

Habits : Bee-eaters are very acrobatic and swift in their flights with the help of which they manage to prey on a large variety of insects including bees from beehives. They are sociable and are seen in large numbers together.

Habitat : They inhabit open country, cultivation and light woodland. They can be seen perching on wires and bare branches or on sandy ground because they frequently take dust-baths. 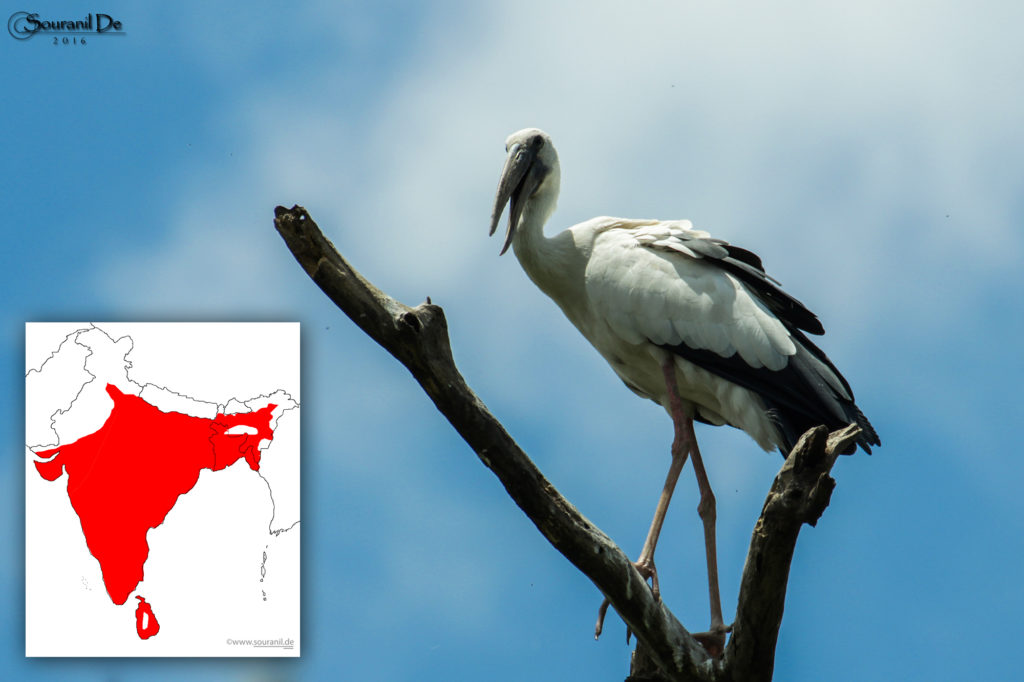 Appearance : Also known as the Open-billed Stork, they are large, erect, black and white storks with long, permanently open beaks. Their legs and beaks are reddish. Sexes are alike and immatures are dark-brownish grey.

Habits : They are voiceless birds who feed on molluscs and aquatic prey. Openbills, like other storks, reside in large tree colonies adjacent to waterbodies. They fly with neck and legs extended.