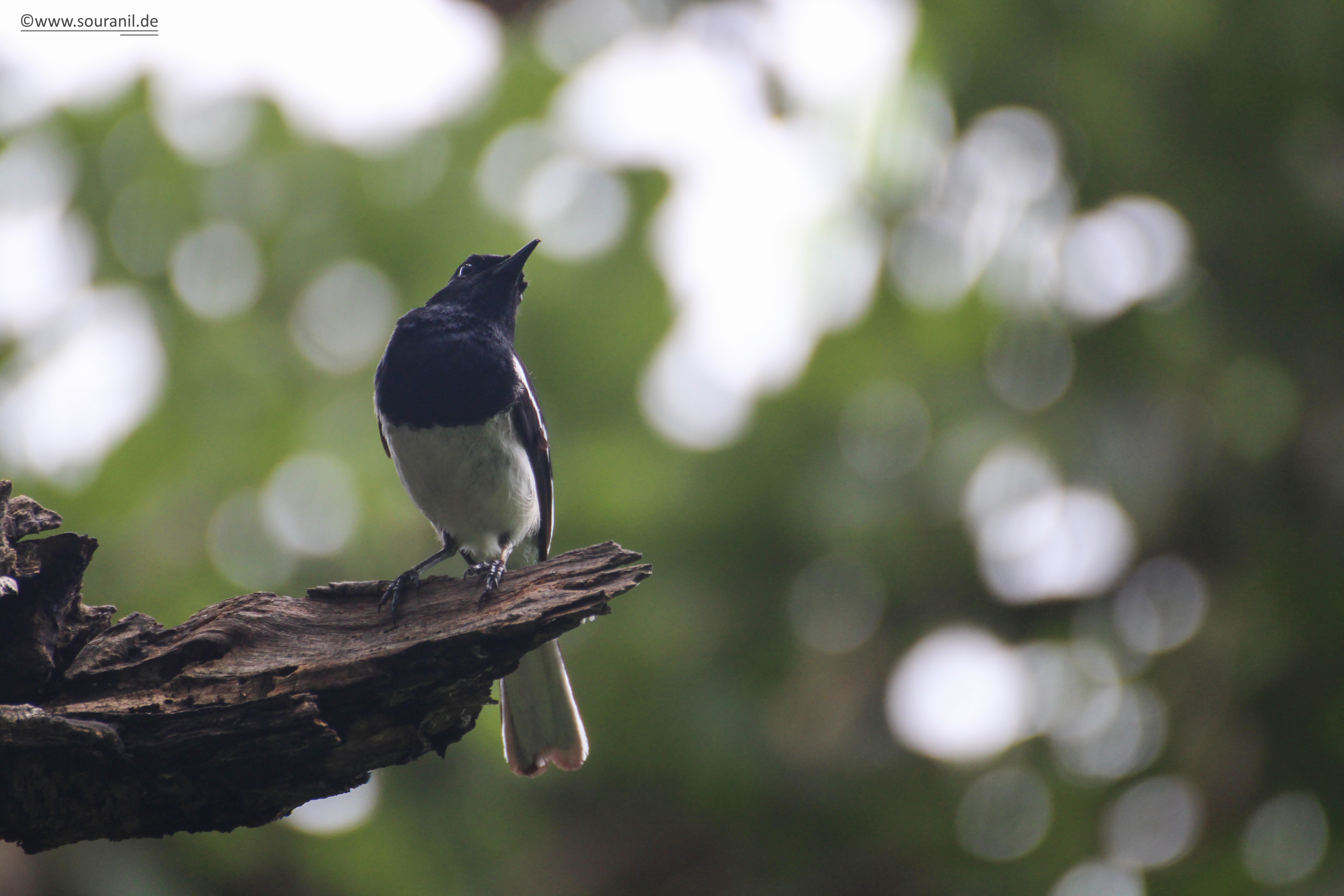 The Concept of Commoners :

The previous blogposts dealt with the behaviour of birds, the techniques for their identification, their classification and the analysis on their activity. The upcoming posts including this one, will deal with an introduction to some common species who are popularly termed as ‘Commoners’. The following are a list of some common birds who are abundantly present in the urban as well as the rural environment and hence, chances of sighting them are maximum. In other words, these are some of the birds which one can expect to see on daily basis. Along with their photographs, there are their distribution maps (of the Indian subcontinent) which indicate the geographical area where they are existing. 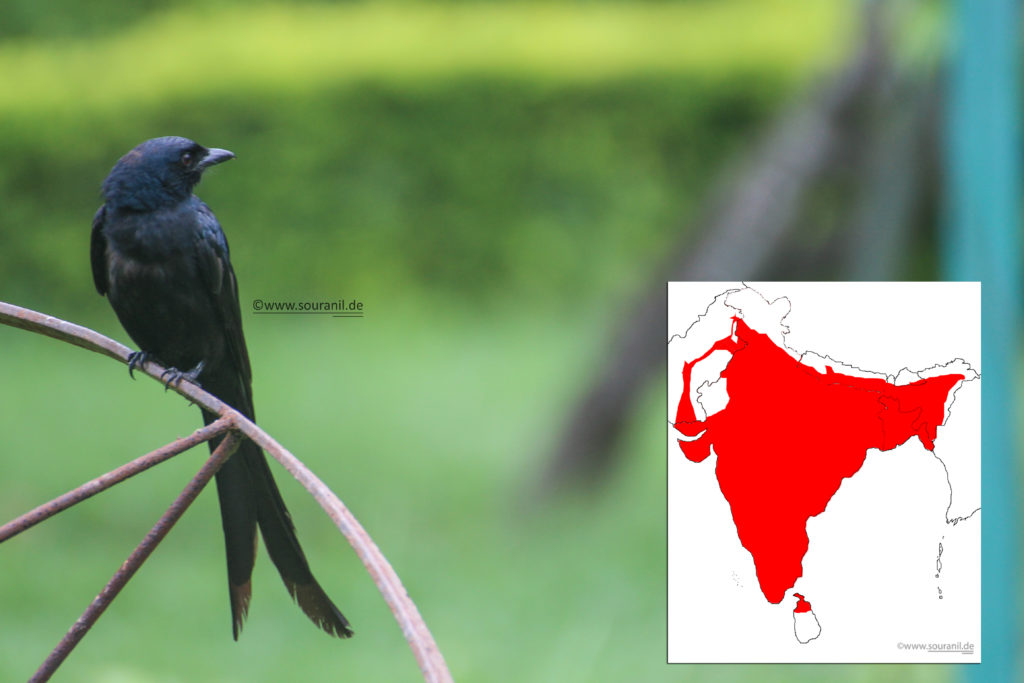 Appearance : Also, known as the King Crow, they are glossy black birds with  long, forked tails. They have dark red eyes with a deeply forked tail when moulting. Juveniles have a whitish belly with no or little fork.

Habits : Usually solitary, sometimes in small groups, they pounce on aerial and ground insects from perch. Also, they follow livestock and ploughs for the same reason. Their calls include squeaks and chatters. They are aggressive and non-chalant to larger birds and they nest in trees.

Habitat : They are considered to be commoners among the drongos, inhabiting open, wooden country, urban parks and cultivation and perching on ground, wires and bare branches. 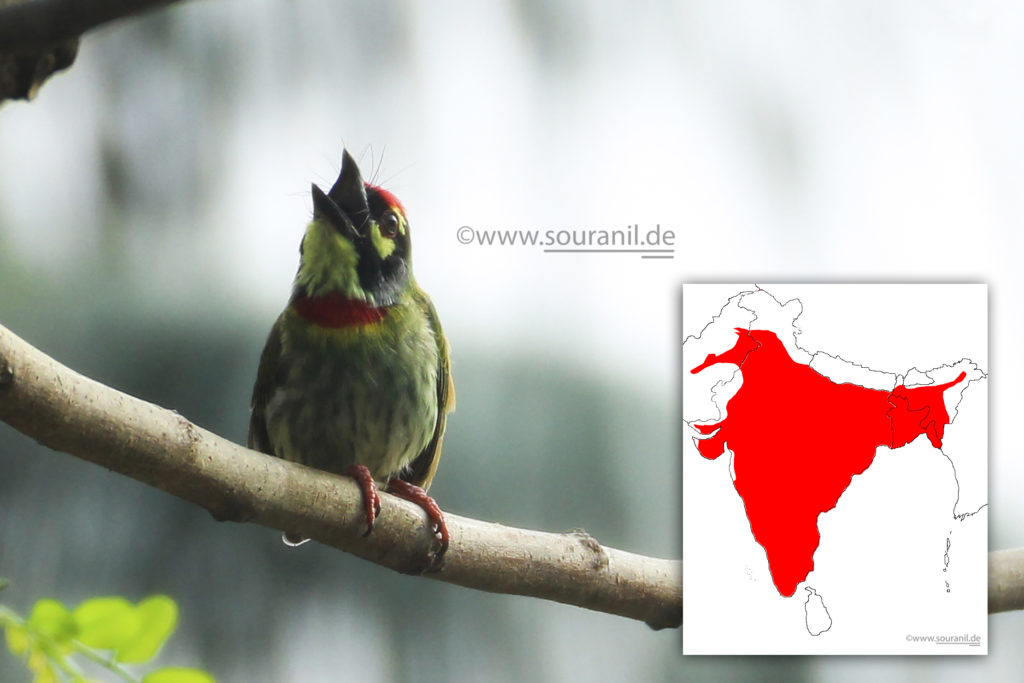 Appearance : Also, known as the Crimson-breasted Barbet, it is a small green barbet with brightly coloured head. It has a black-bordered yellow face with eye strips, red forecrown and throat patch. The bill is stout and dark. The rest of the body is majorly green with paler underparts. Sexes are alike. Juveniles do not have the red colour composition.

Habits : They are sociable and inquisitive. They mainly feed on nectar and fruits and nest in tree holes. The call is like a constant and repeated hammer beat on metal and hence it is known as the Coppersmith Barbet.

Habitat : They are considered to be commoners among barbets and are easily found wherever trees exist (except for dense forests). Their primarily green body helps them with effective camouflage. 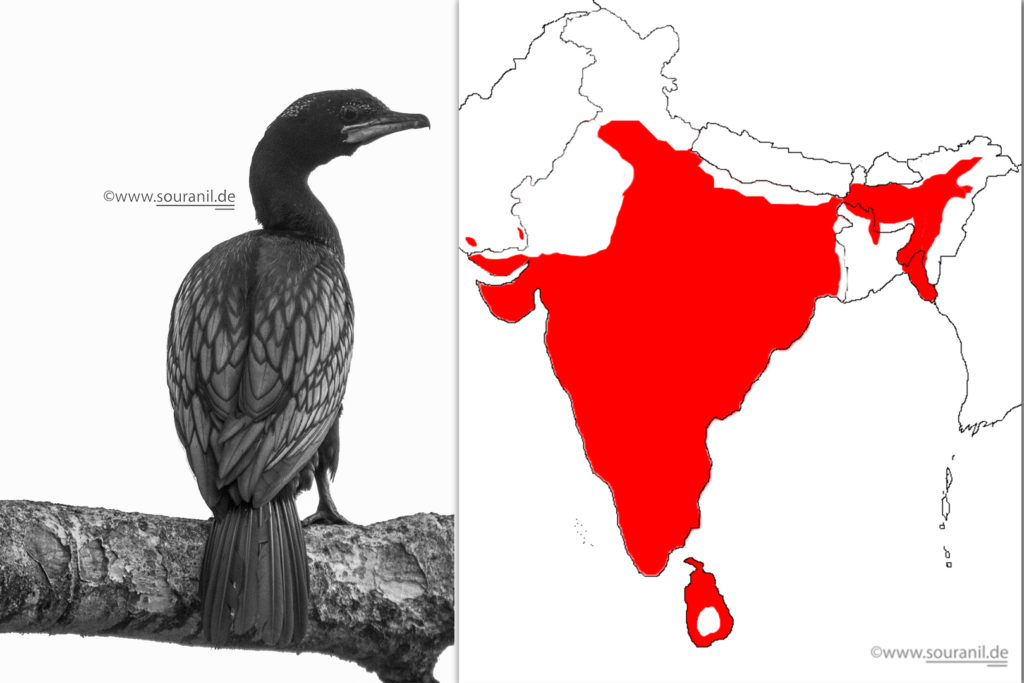 Appearance : Also, known as the Indian Shag, it is medium-sized black waterbird. It has a slender neck and bill with a long flat head. It is slightly brownish in non-breeding state. Sexes are alike.

Habits : Cormorants are usually silent but they croak near nests. They dive into waterbodies for fishing and swim low, but fly strongly and often high. They are often seen to hold wings open to dry them. Nesting is done in tree colonies often with other waterbirds.

Habitat : They are seen to inhabit large waterbodies and the coast in large flocks. Their nesting locations are usually close to their feasting waterbody. 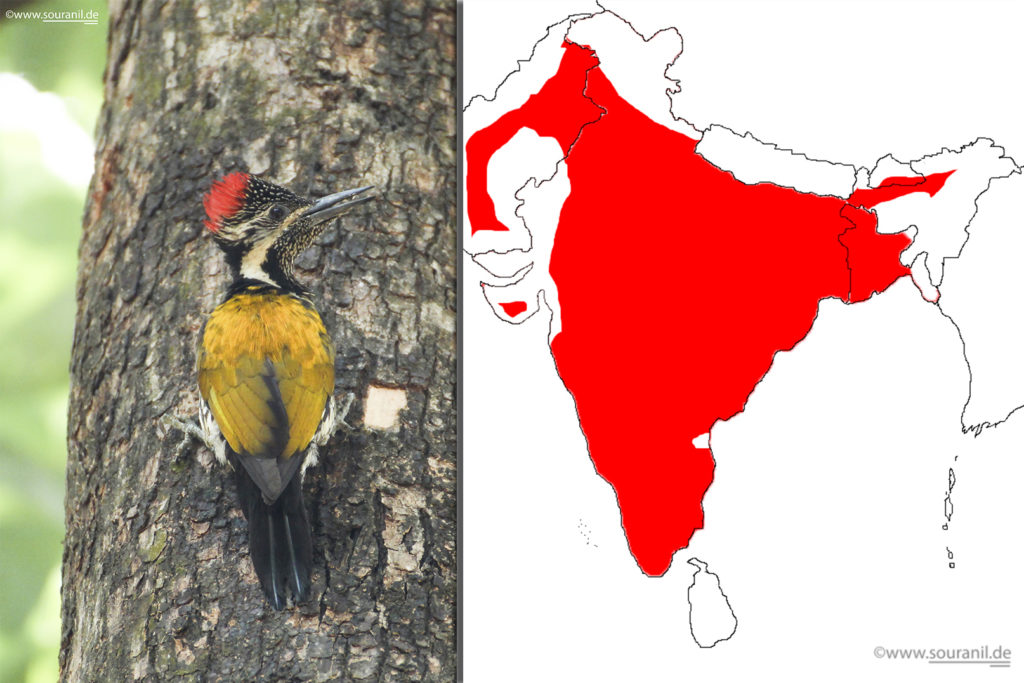 Appearance : Also, known as the Lesser Golden-back, it is a bright golden and black woodpecker with a bold red crest (female has blackish forecrown). It has black and yellow speckling on shoulders with black nape, rump and tail. Also, there is a white-streaked black throat and eyestripes which contrast with white cheeks.

Habits : They are noisy birds with laughing cackles similar to the call of the White-throated Kingfisher. They feed on lower parts of tree trunks and on ground on invertebrates, mainly ants. They are often witnessed to rise up along broad tree trunks, pecking the barks in search of invertebrates. Their tail is used as a propeller. Their nests are self-made tree holes.

Habitat : They are seen to inhabit dry open woodland, plantations and scrubs but they preferably nest in denser locations for the sake of security. 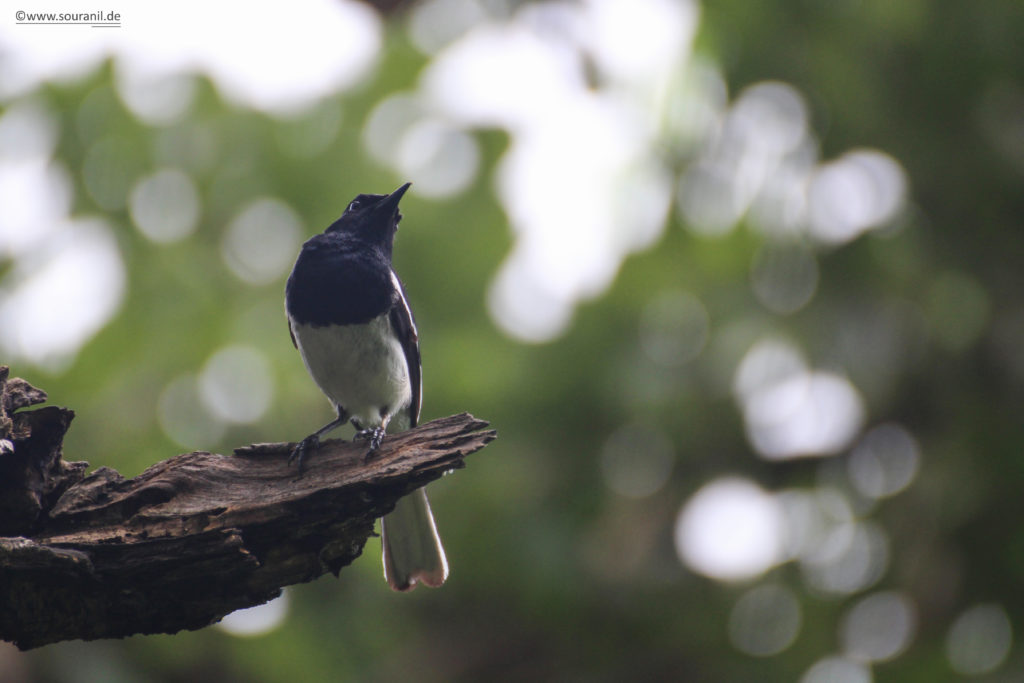 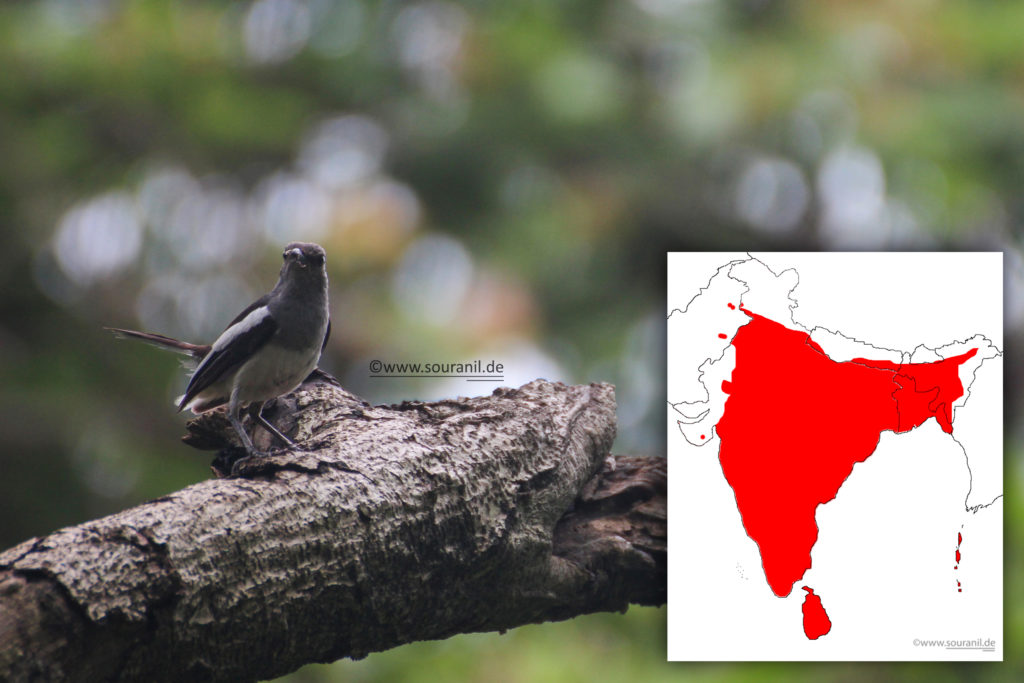 Appearance : Also known as the Asian Magpie Robin, it is a long-tailed, black and white medium sized bird belonging to the group of chats. The male is glossy blackish (female is greyish) above with white wing patches. The lower breast to vent is white.

Habits : They are often seen to flick and wag their long tails like wagtails do. The oriental magpie robins are usually noisy birds having harsh alarm calls, a stretched whistle as contact call and otherwise rich piping songs. They are aggressively territorial and quite confiding, with nests in tree holes, banks or buildings.

Habitat : They inhabit almost all types of wooded country including parks and gardens, frequently perching high, particularly when singing but when they feed, they are nearer to the ground. 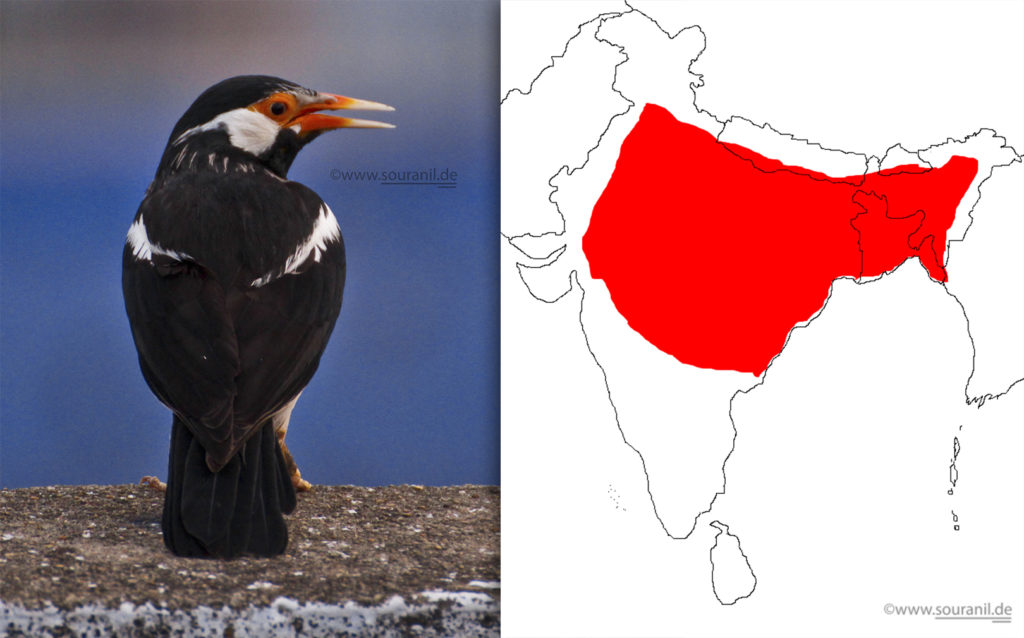 Appearance : Also known as the Pied Mynah, these are black and white terrestrial starlings with long pointed, red-based yellow bill and orange patches around eyes. They have yellow legs and sexes are alike.

Habits : They are observed to be noisy with whistling, chuckling and screaming notes. They mainly feed on invertebrates, fruit and grain and are witnessed to reside socially in scattered flocks. They make untidy nests in trees and colonies.

Habitat : They inhabit towns, villages and grasslands, existing in flocks, with strong pair-bonds. 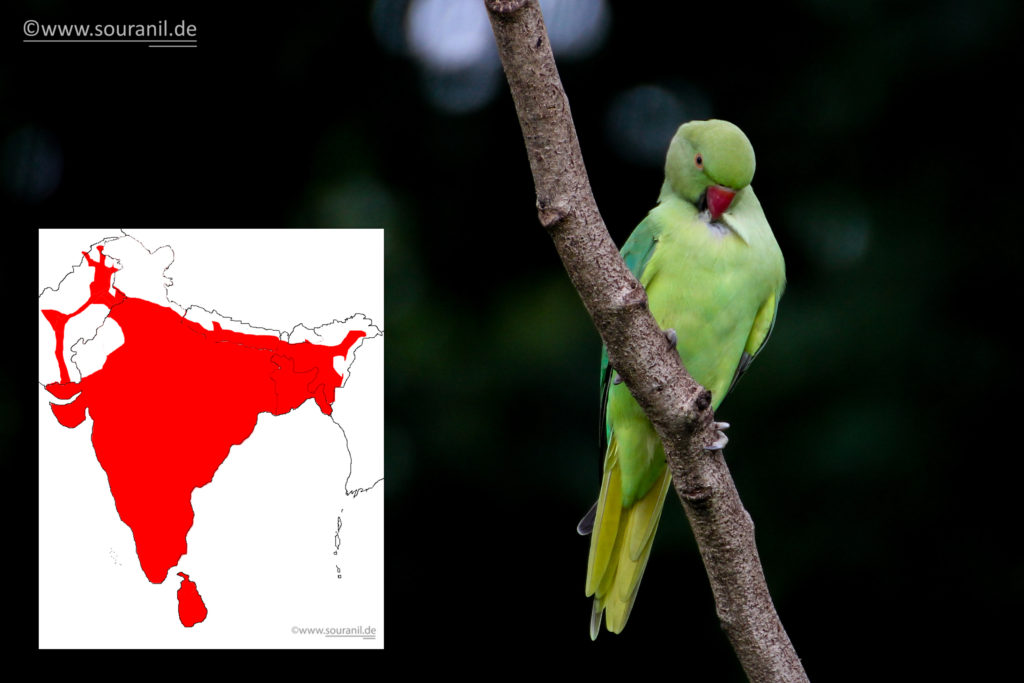 Appearance : They are the commoners among the family of parakeets. The base colour is grass green, along with a bluish tail and red bill. The male has black and pink  malar stripes and collar after third year. The female lacks these.

Habits : They are well-known for damaging vegetables, fruits and grain crops. The call is generally noisy both during flight and rest. A loud shrill shriek is usually repeated. Nesting is done in holes in trees and walls, often enlarging an existing site.

Habitat : They inhabit trees, usually tall ones. In other occasions, they favour city parks, gardens and cultivations. 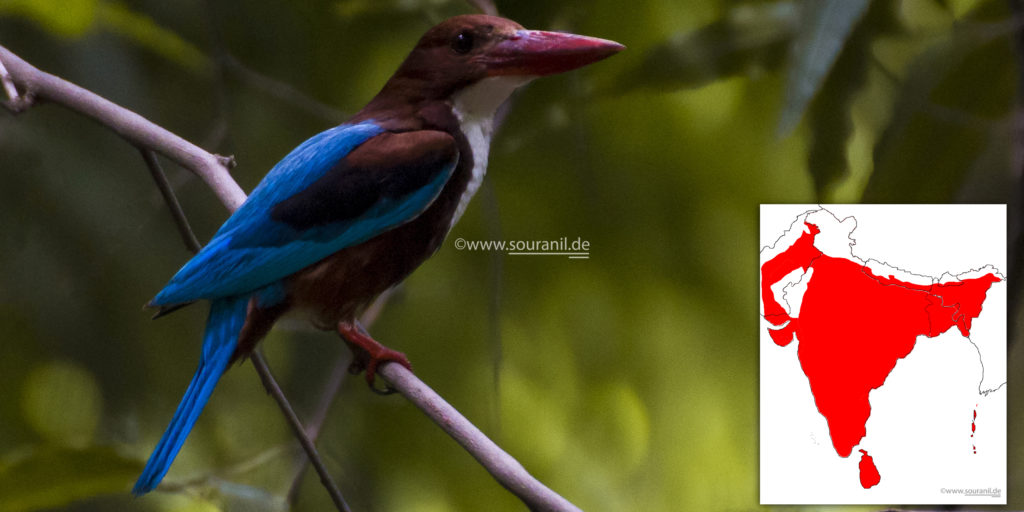 Appearance : Also known as the White-breasted Kingfisher, it is a medium-sized kingfisher with a powerful red bill and a long tail. The head and underparts are brown with white throat and central breast. The back and tail are bright blue. Sexes are alike.

Habits : The calls are noisy. They are often heard with a very loud and long periodic cackle. They feed on fish, insects, reptiles, amphibians and rodents. Nesting is done on banks.

Habitat : They are known to be commoners among kingfishers and are found in cultivation, parks, gardens, fresh and coastal wetland, frequently perching on wires, posts and in trees.