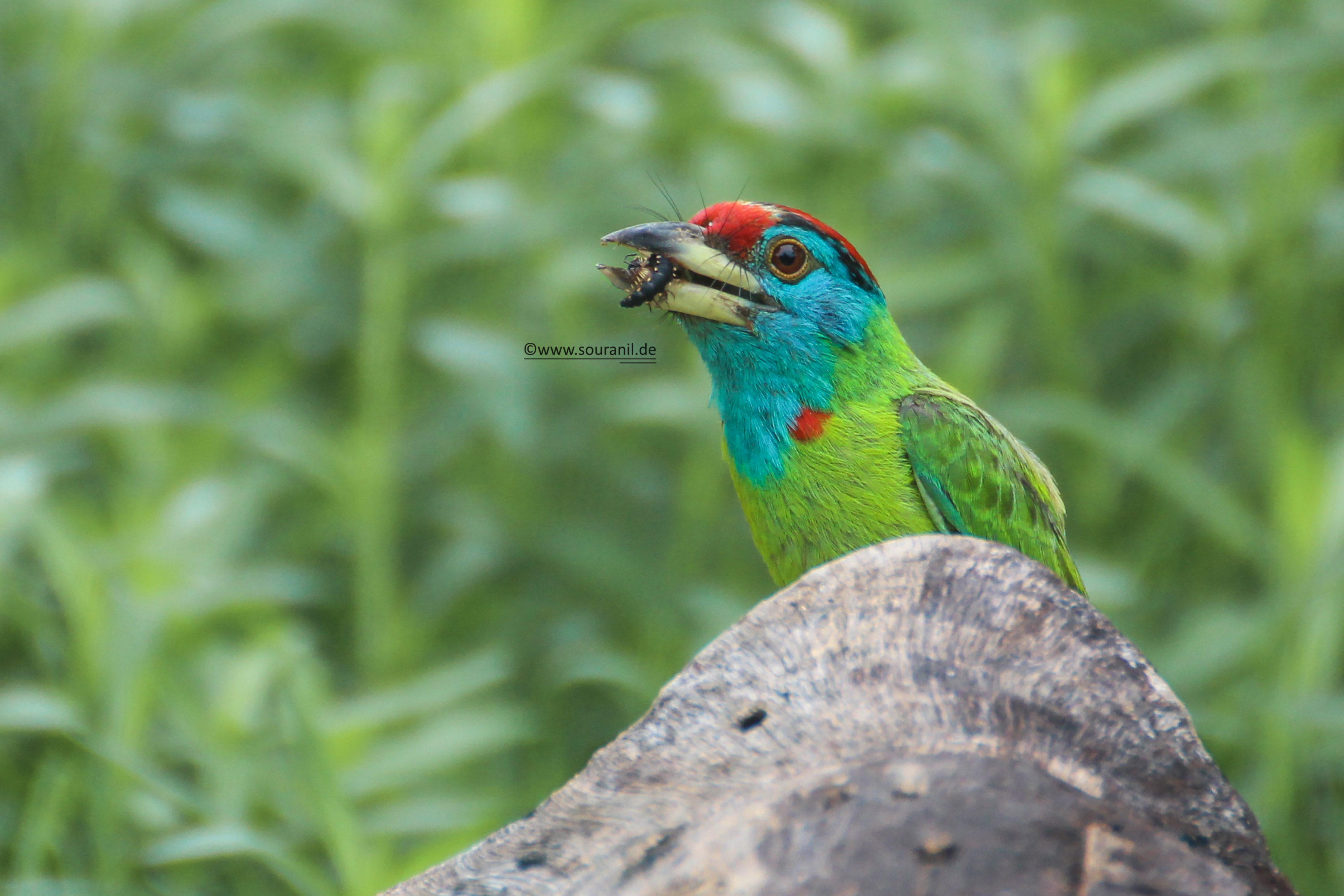 The previous blog posts regarding commoners concentrated on the most common species available around us (seen everywhere). Here are their links : [Post 1] [Post 2].  The upcoming posts (including this one) would focus on slightly less common birds who are abundantly available in the environment, but are easier to spot, when we look for them in their natural habitat. In other words, they are the commonest of the birds(commoners) available in a particular birding location/nature park/sanctuary. Besides, these species are more popularly seen in the Eastern part of the Indian Subcontinent. 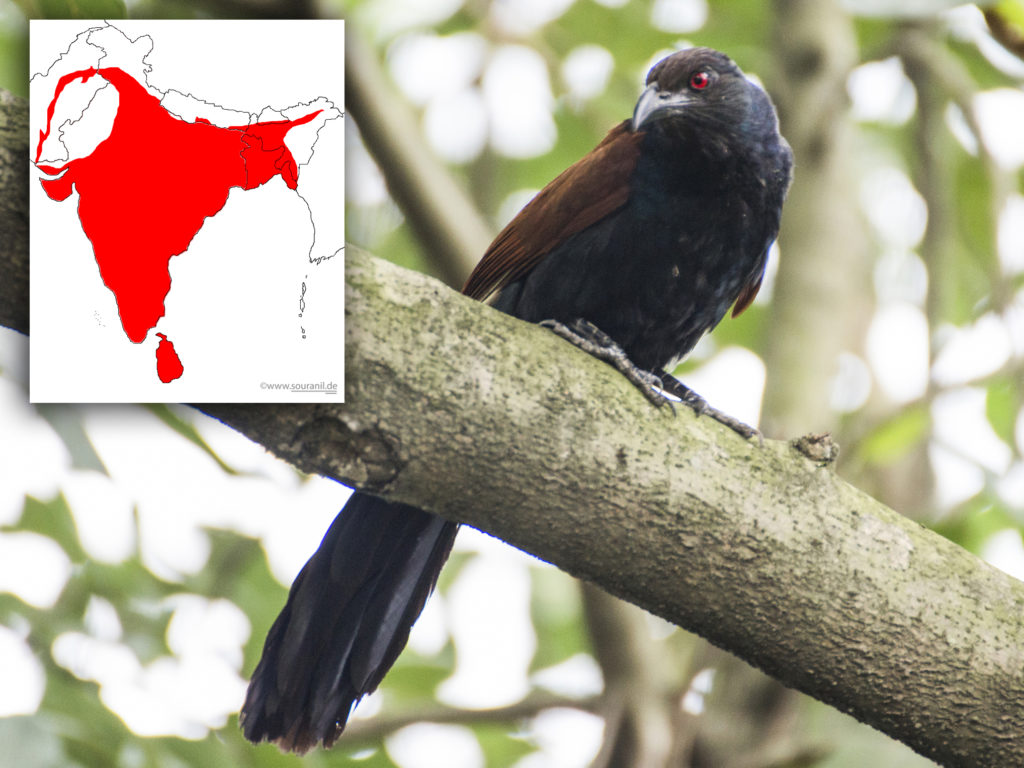 Appearance : Also known as the Crow-Pheasant, they are large, black and chestnut cuckoos with long and broad tails. They have a glossy black plumage with chestnut mantles and wings and red irises. Females are slightly larger in size. Juveniles have a barred white plumage.

Habits : They have a characteristic low-pitched, repetitive and continuous call which often fades away. This call is typically heard in places with dense vegetation. They feed on reptiles and large insects, whom they locate by walking around their preying locations. Being a relative to the cuckoos, they too rob other birds’ nests. Their flight is weak. 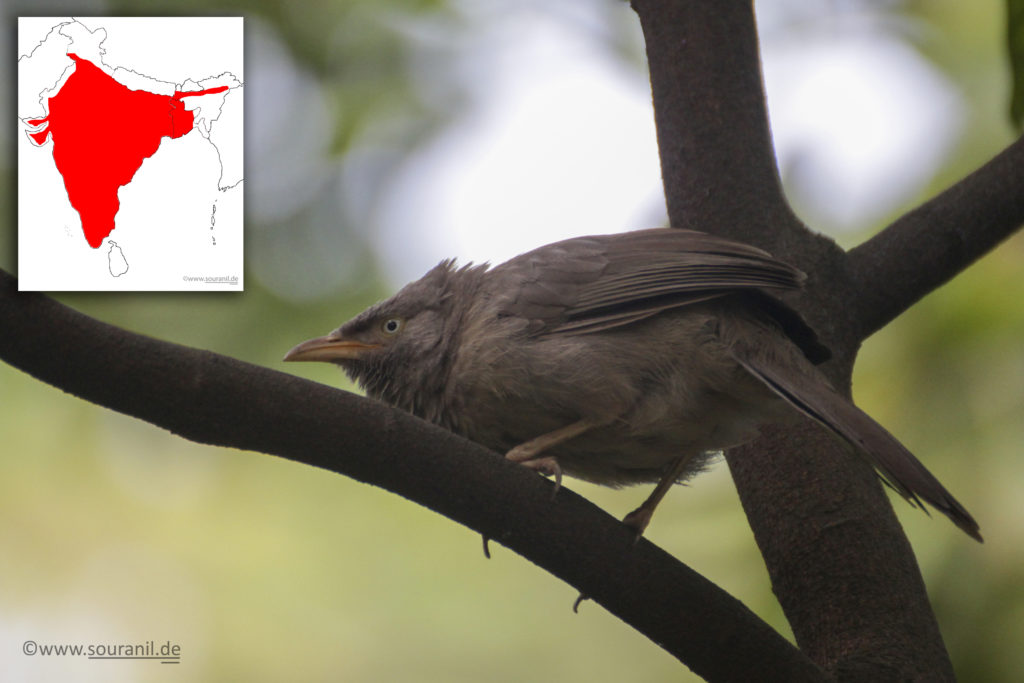 Habits : They are very noisy with chorused harsh chatters and squeaks. They feed mainly on insects. Although they exist in groups, they are confiding and inquisitive. Bushes are their nesting locations. 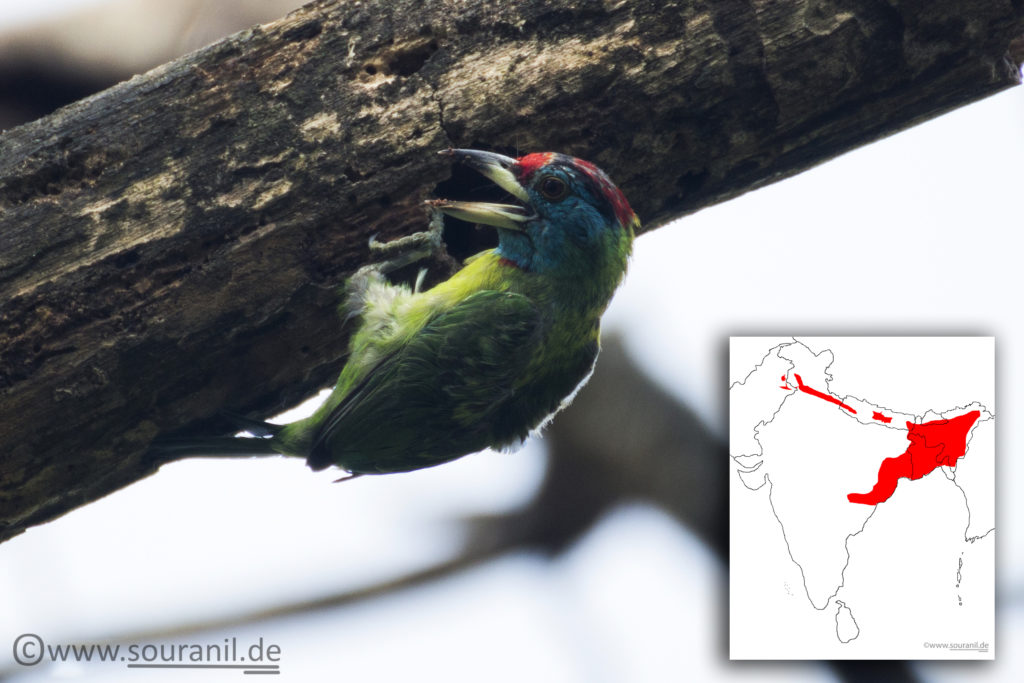 Appearance : They are medium-sized, grass green barbets with red-capped blue heads. The blue colour extends to the throat and upper breast. Sexes are alike.

Habits : The call is like a continuous croak, with two or three notes in each phrase. This call is also a typical one in dense forests. They are very secretive and hardly come out in open perches. Nesting location, like most Barbets, are tree holes.

Habitat : They inhabit forests and groves with fruiting trees, mostly arboreal and solitary. 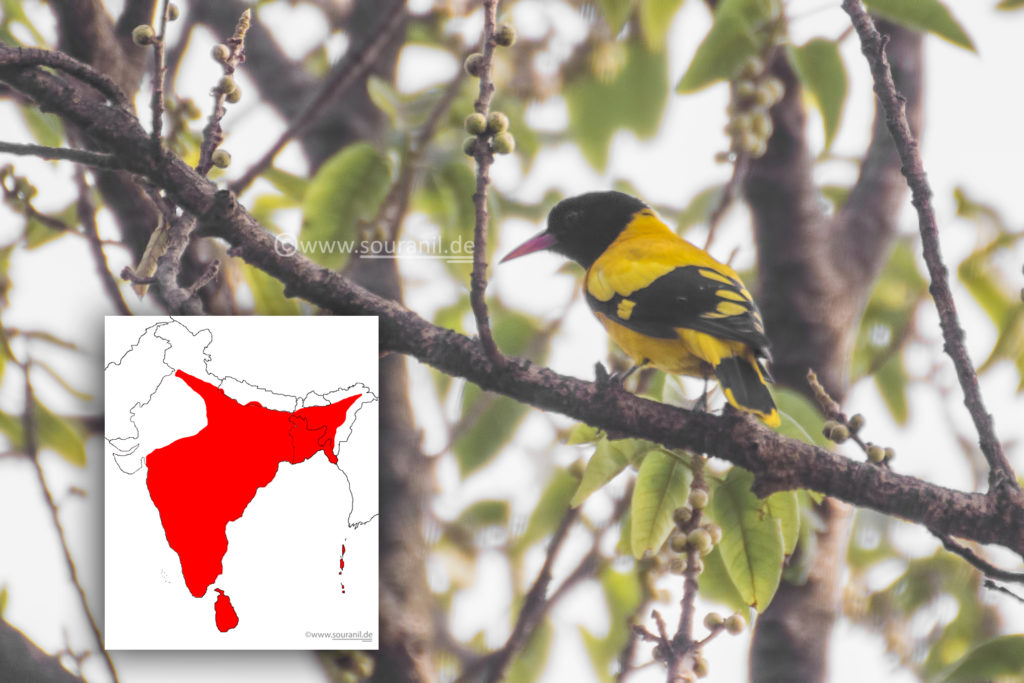 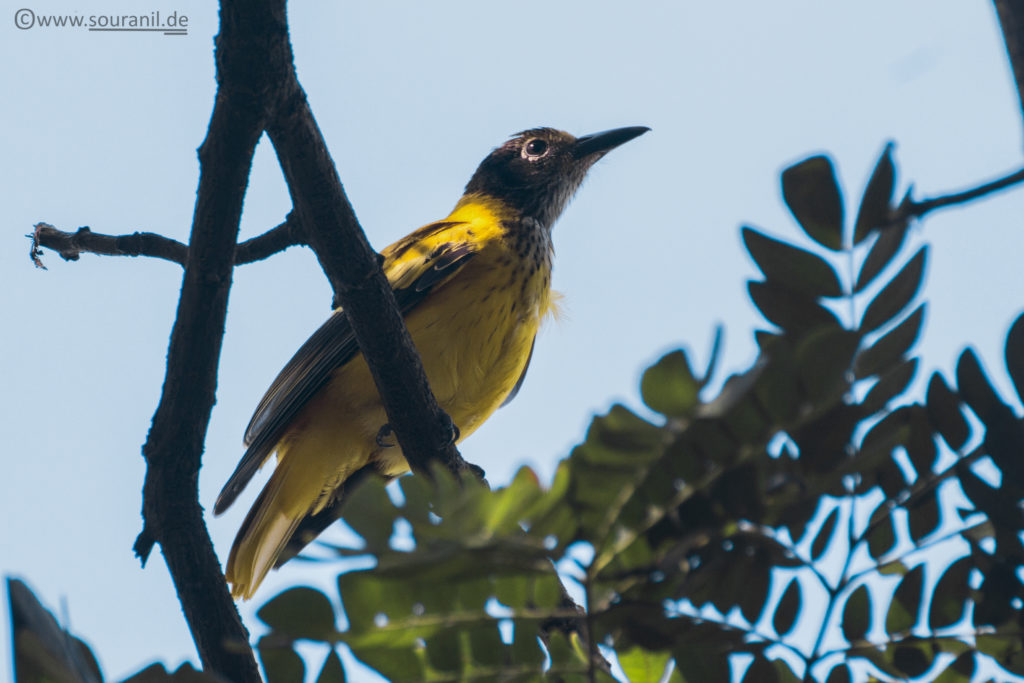 Appearance : Also known as the Black-headed Oriole, they are medium-sized bright yellow and black arboreal birds. Their bills are pinkish-red. Juveniles have white-speckled throats with greyer hoods.

Habits : These Orioles are fluty, melodious songbirds who confide themselves in the upper perches of dense canopies and hence, are difficult to spot. Similarly, they nest high above in trees. They feed on caterpillars, insects, nectar and fruits.

Habitat : They inhabit well-wooded country and forests, including urban parks and gardens. 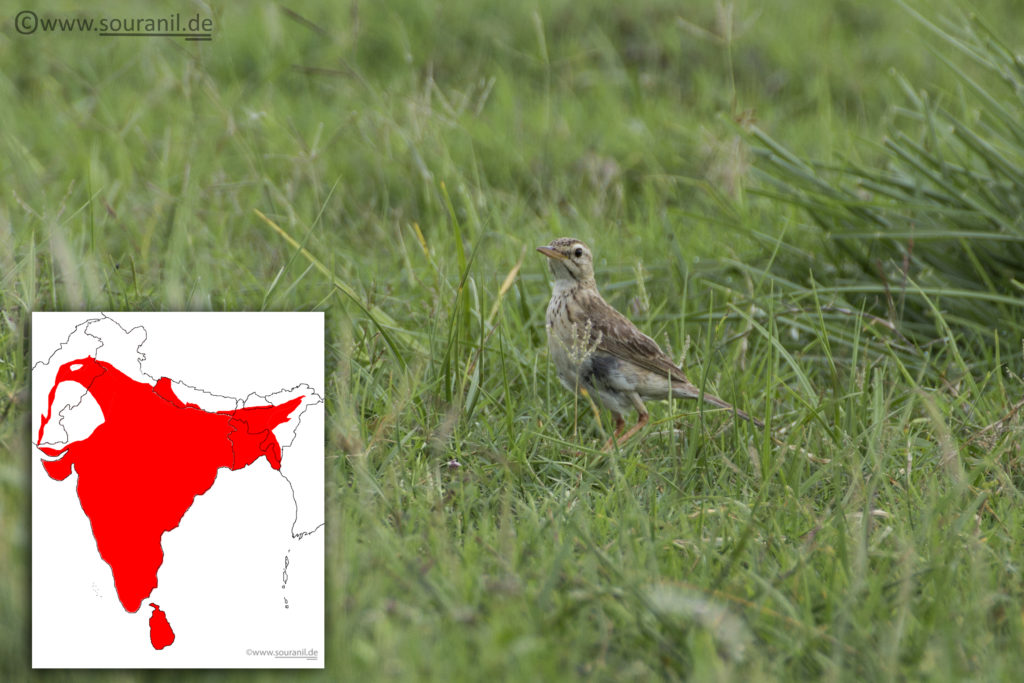 Appearance : Also known as the Indian Pipit, they are medium-sized, brown, streaked passerines with fine short bills.  They are best identified by their spotted streaks near the throat.

Habits : Their call is a short, weak chirp, which is audible quite often in open grasslands. They feed and nest on ground. They feed in pairs or loose groups, mainly on invertebrates and seeds. These Pipits (like other ones) are fast runners and on stopping, they frequently wag their tails. 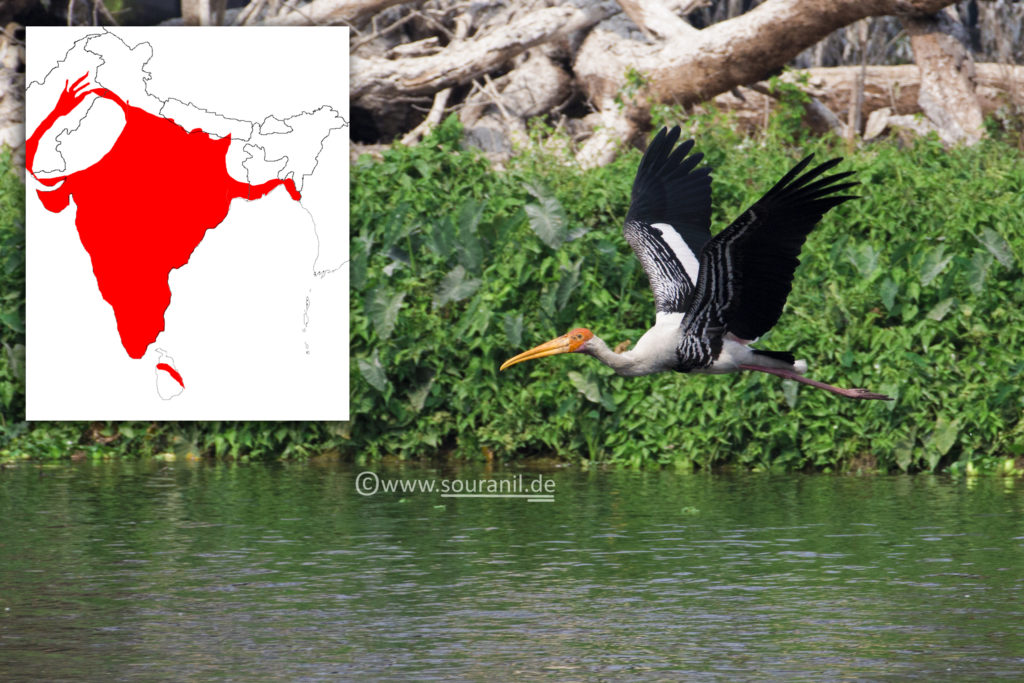 Appearance : They are huge, erect waterbirds with white and black plumage, and a pinkish wash on their lower backs. Sexes are alike. The immatures are dusky grey.

Habits : They nest high in tree colonies and are very social, perching on bare trees. Fish and other aquatic animals in shallow water are their primary source of food. 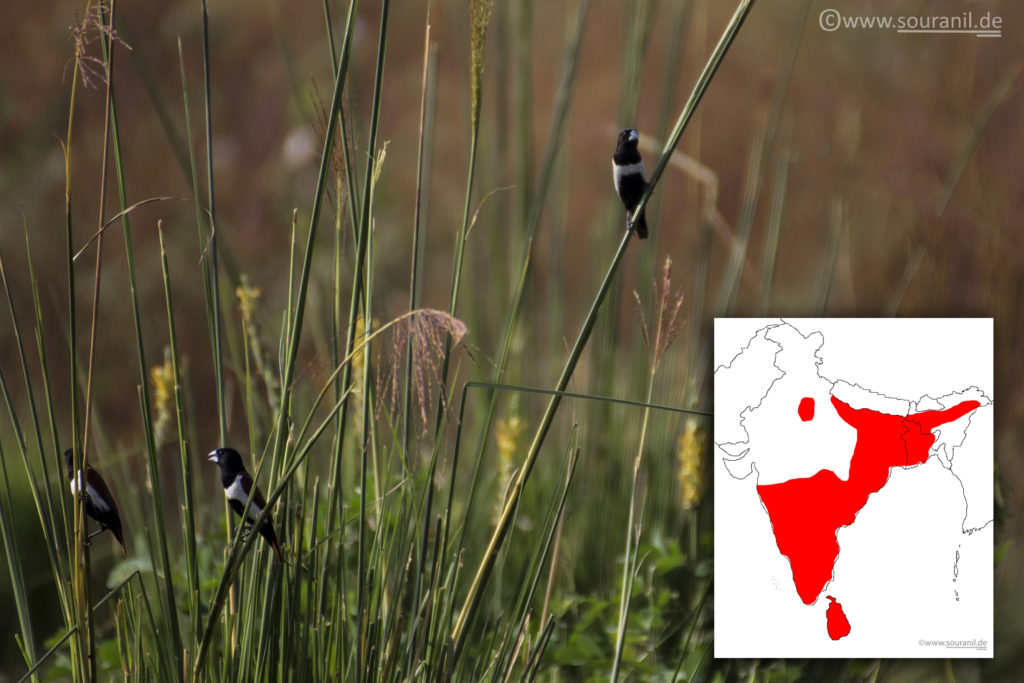 Appearance : Also known as the Chestnut Munia, they are tiny, black and chestnut passerines with brighter rumps and tails. Sexes are alike.

Habits : Munias have soft, low-pitched calls. They feed in groups, on seeds and invertebrates and nest in reeds. 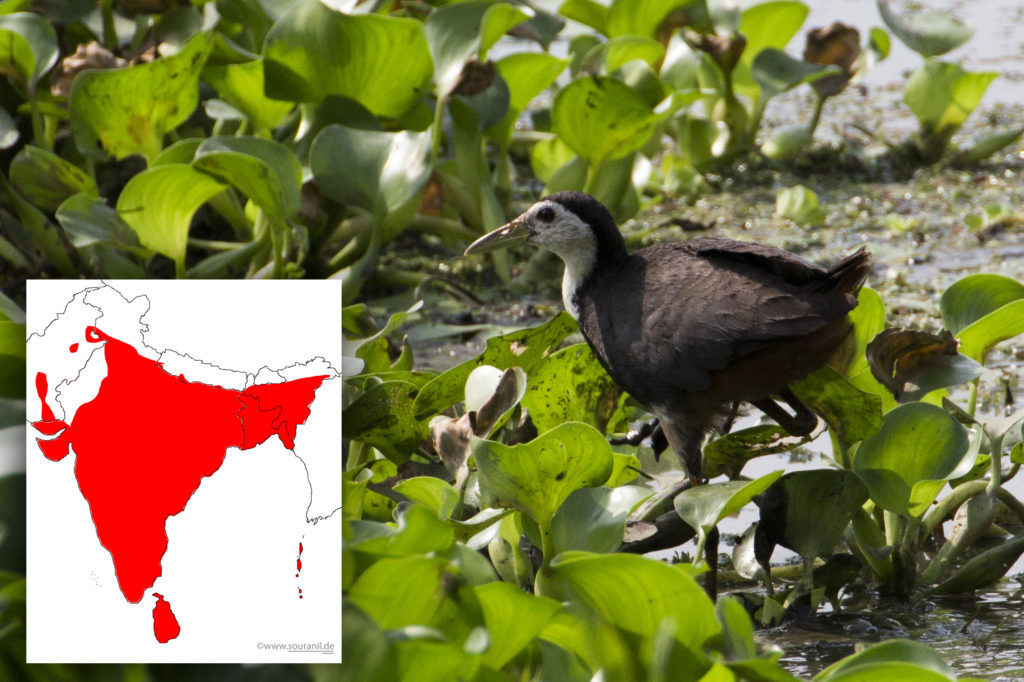 Appearance : They are large, long-necked grey and white crakes. Their forecrowns and bellies are white and are dark slaty-grey from rear crown to tail, including flanks. Sexes are alike.

Habits : They are noisy when breeding, with grunts and chuckles. Although they are the commoners among crakes, they are confiding and secretive. They feed on invertebrates and plants and nest on ground.

Habitat : The inhabit marshes, village ponds, streams and hide themselves behind thick vegetation or undergrowth adjacent to waterbodies.