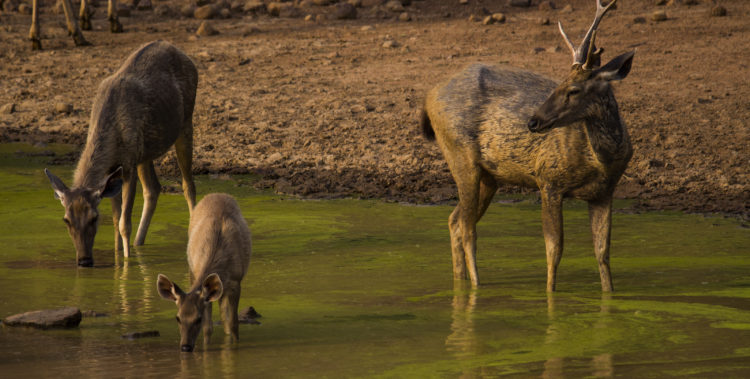 Does the Peace Rock really exist ?

“When water is plentiful, the laws of nature and the jungle are as they should be. However, when a drought causes water to be scarce, the effects impact villagers, the habitat and even the “law of the jungle.”

What is the Peace Rock ?

In his The Jungle Book , Rudyard Kipling demonstrated a beautiful phenomenon which conveys how the wild adapts to strive together during the harsh Indian summer. When summer sets invades in India, the water sources run dry and cause panic amidst the animal kingdom. They thirst for water to wet their parched throats more than actual food.

The Peace Rock initiates a level of empathy between the prey and the predator. Due to it’s presence, the animals voluntarily choose to differ from the law which allows for no unanimity between them. They realize for that period of time, the intense discomfort that can occur when one is thirsty and through a mutual understanding, they agree to drink water side by side, without harming each other, all due to the boon of the Peace Rock.

As previously stated, the animal kingdom recognizes a bend from the law, by virtue of the Peace Rock. However, it is merely a hypothetical concept and it basically signifies that during the summers, animals realize the significance of water and they behave more generously towards their prey. Two concepts inspired Kipling to introduce the Peace Rock. Firstly, the decreasing water levels in water-bodies and secondly, the integrity displayed by all animals.

Last summer, in Tadoba-Andhari Tiger Reserve, I had the opportunity to observe wildlife activity in and around a pond for about two hours. It was late in the afternoon and the scorching heat had its effect on both plants and animals. Consequently, it became necessary for animals to take a visit to their nearby water resources. A large number of animals decided to visit this aforementioned pond. Each species took their turn and patiently waited for the previous ones to finish drinking. The unity and integrity they displayed was overwhelming !

The Order of Activities :

The first ones to arrive to the pond were the Spotted Deer. They spent a considerable amount of time, drinking and bathing. The family also had a fawn who was breast-fed by its mother. While this small family of deer spent their time in the water, a tigress was watching from below a shady tree and a herd of Gaur patiently waited for their turn. 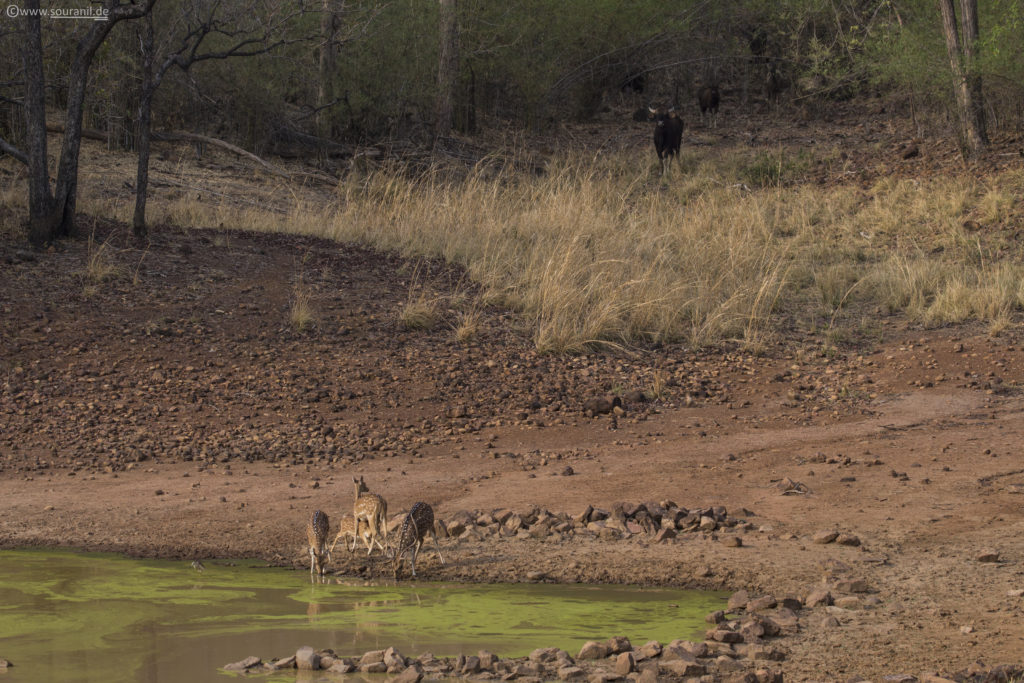 The deer family uses the pond while others wait. 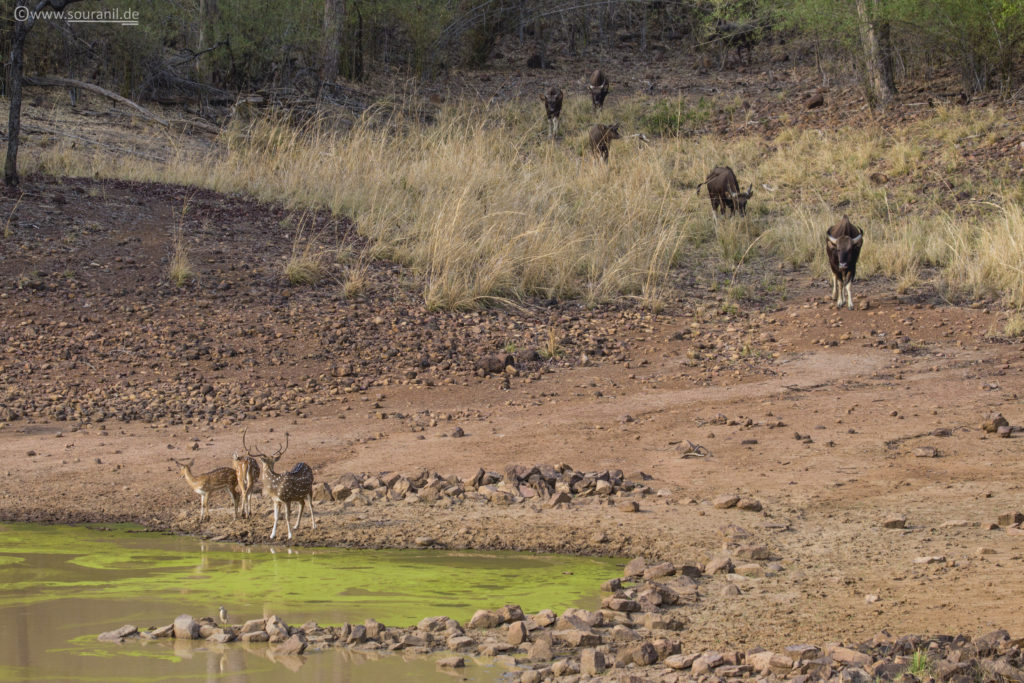 The heard of Gaur now proceed to take their turn and the deer realize that their time was over. 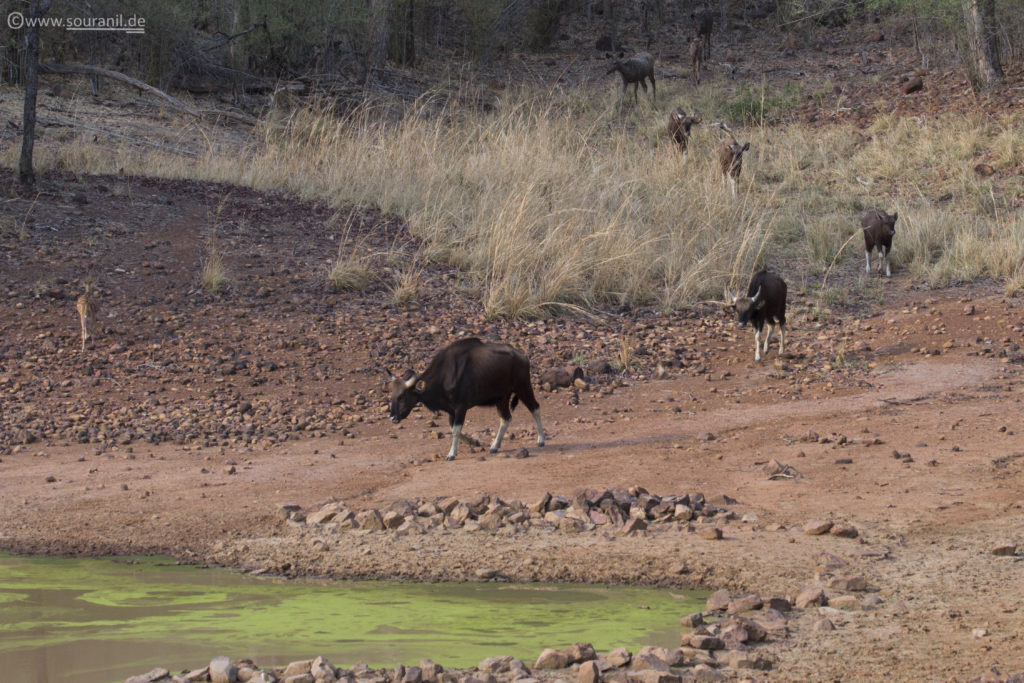 The Gaur now approach the pond and the deer make way for them. 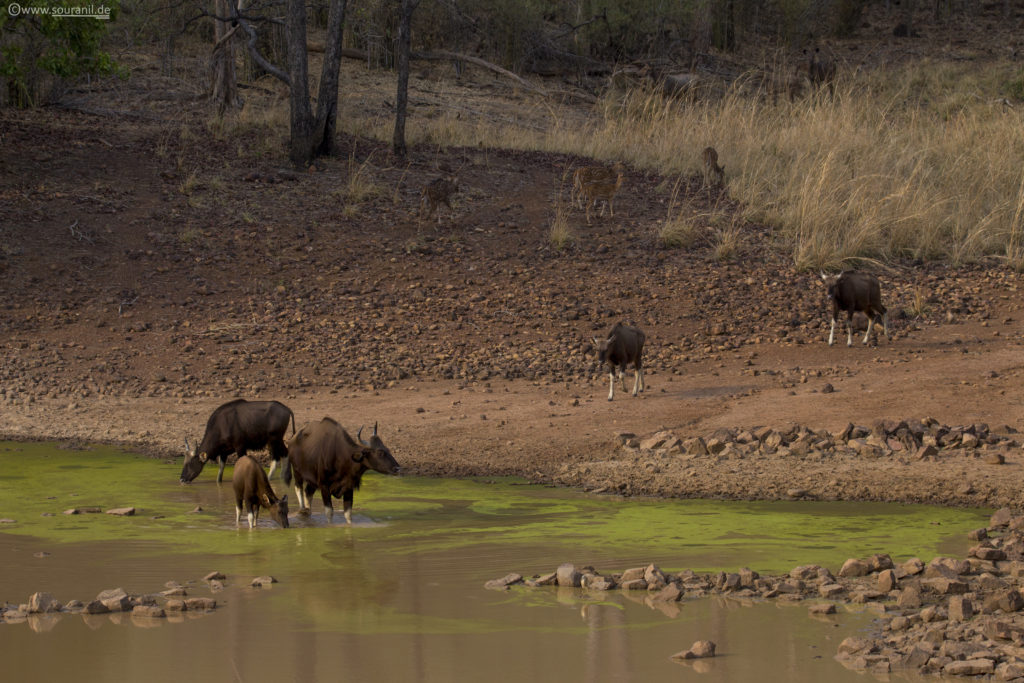 The Gaur now enjoy their time in the water. Meanwhile a herd of Sambar Deer wait for their turn. 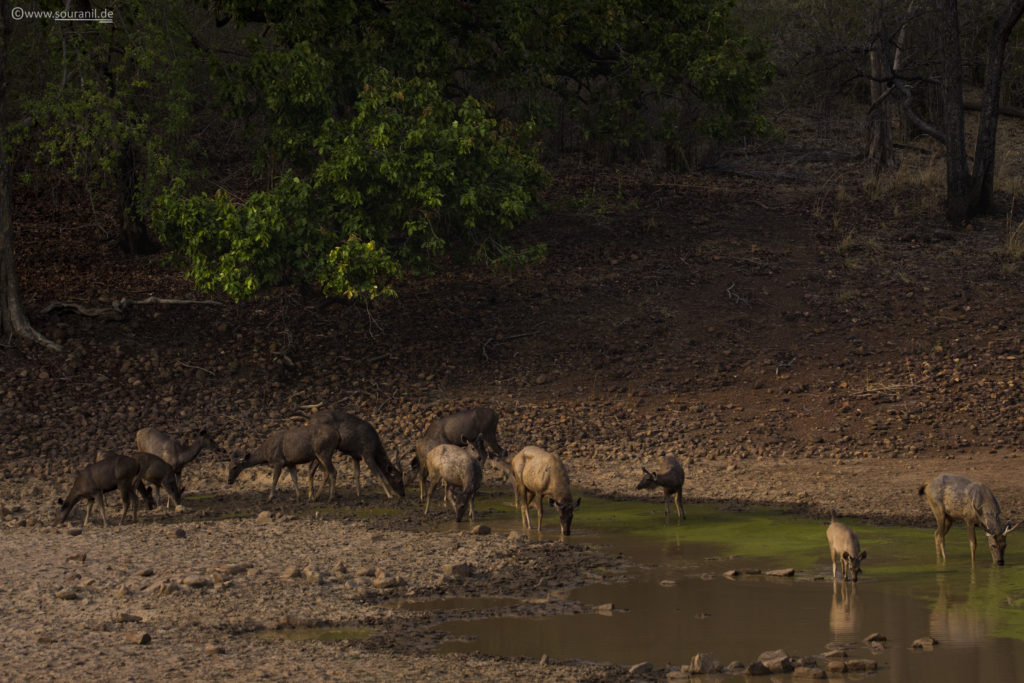 The Sambar now enjoy their turn.

All this time, the previously mentioned tigress patiently waited for others to use the pond, so that nobody faces a difficulty because of her. However, all animals were alert enough about the presence of the tigress. 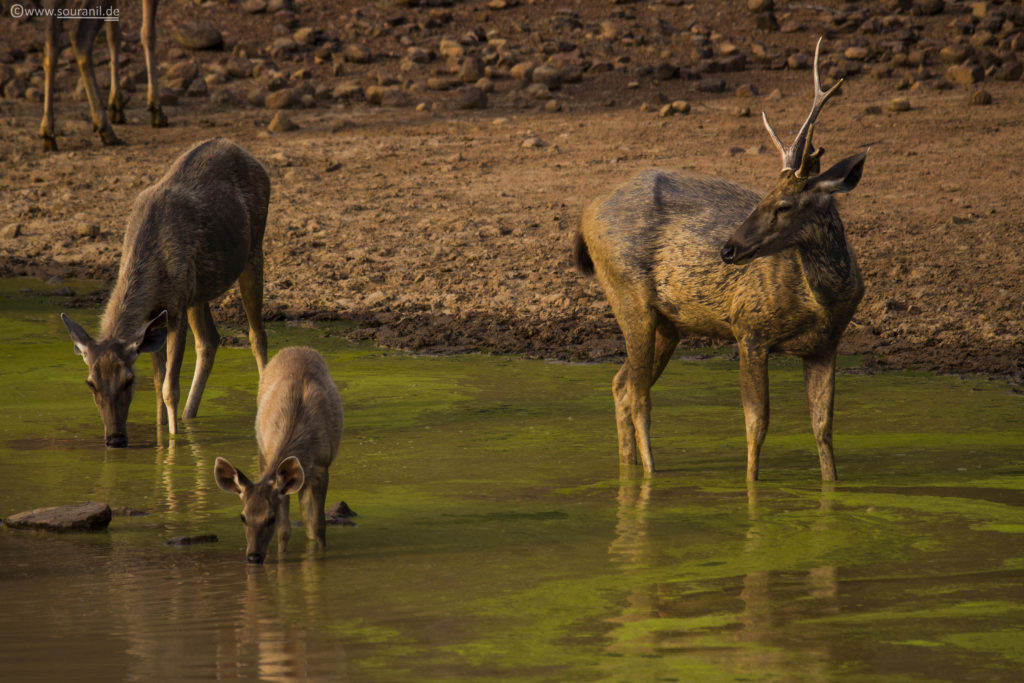 A deer stares at the tigress, detecting the possibility of any danger, while others have a drink. 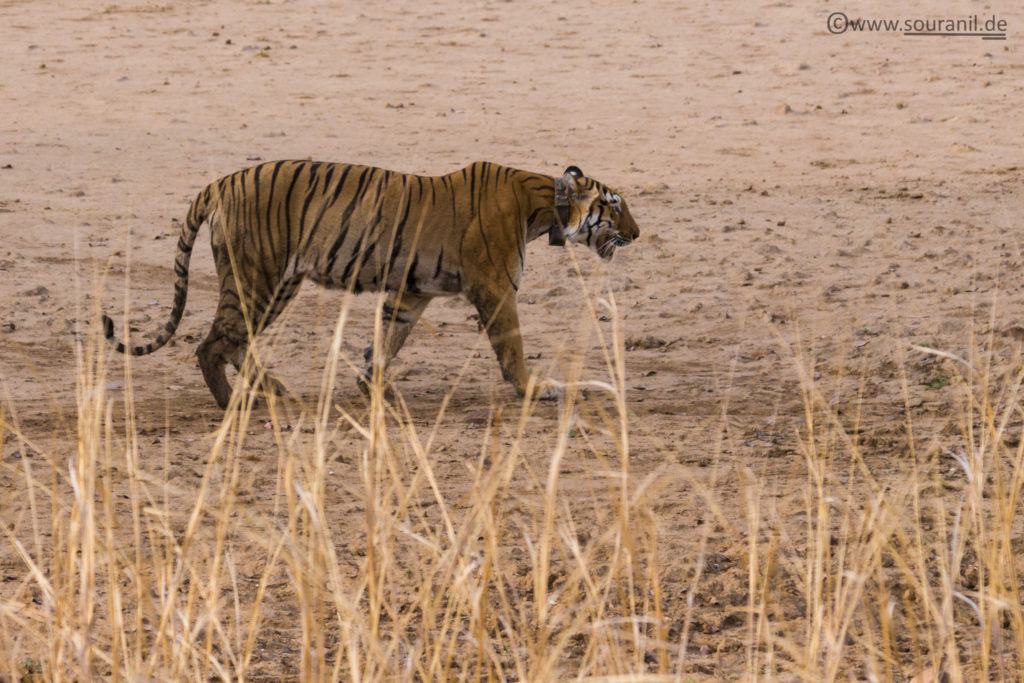 After everyone’s turn, the queen of the jungle finally approaches the pond. 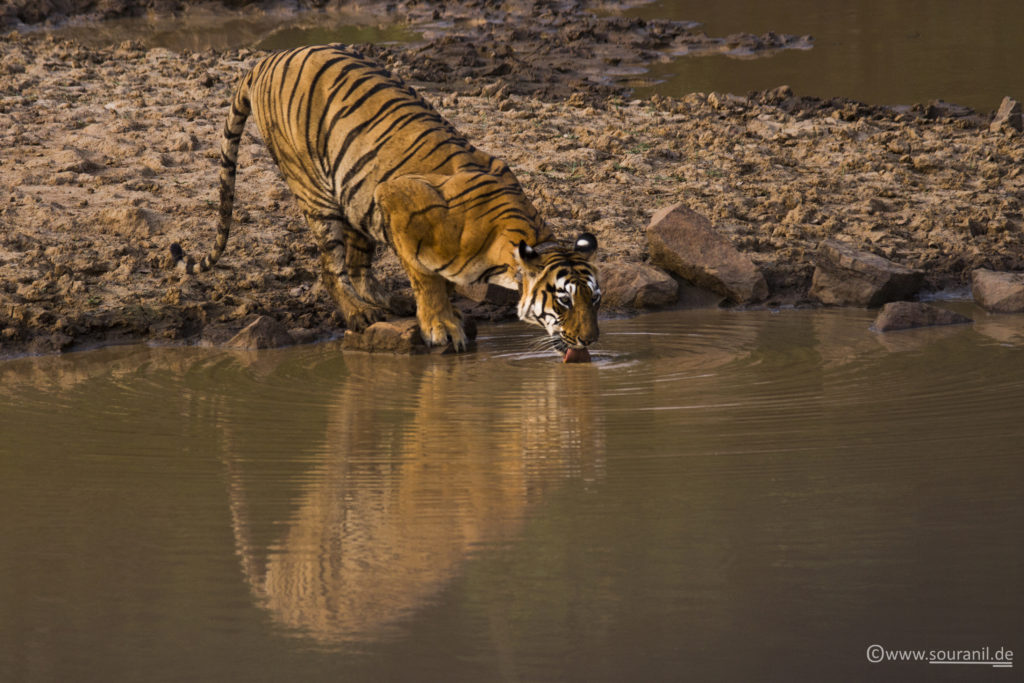 And then she has her sip of water, quite deservedly 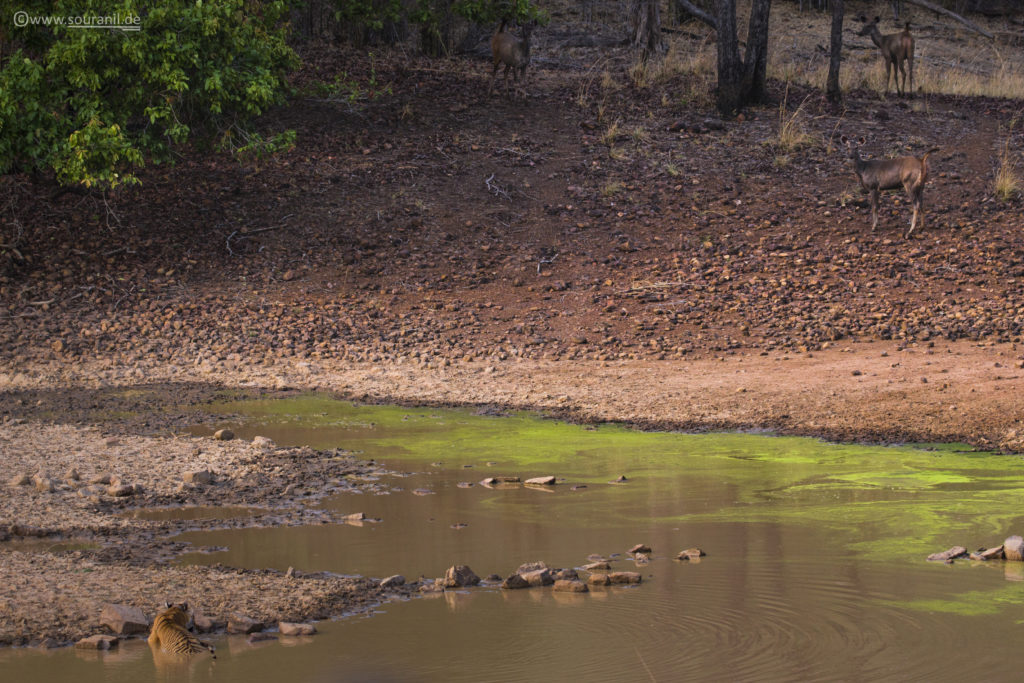 The Tigress rests in water as others watch.

So, irrespective of position in the food chain, it was observed that everyone maintained the peace protocol and displayed a certain amount of respect for each other. Their peaceful co-existence teaches us one of the many lessons that can be learnt from the world.

All photographs and content are subjected to copyright. Please do not use without prior permission.